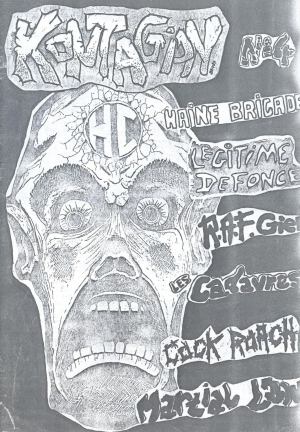 I’d never seen an issue of Kontagion until my mate Dirk Ceustermans borrowed me his copy of #4. The zine was done by Laurent Pallanca & Laurent Laloue, from Neufchâtel-en-Bray (Normandy, France).

We were students in the beginning, later unemployed and undergraduate, living in a small village 45 km from Rouen. Between 1985 and 1989 we did 8 issues (1-5 were A5, the last 3 were A4). At least 50 copies of each but definitely not more than 200… We didn’t do subscriptions, it got out when we had enough material.

Practically all interviews were done by mail… Basically everything had to do with the punk-scene in a broad sense: 77 punk, hardcore on international level (the first grind bands, even crust – though it wasn’t called that way yet), indie-rock (we were totally into that) and we ended by featuring thrash-metal/crossover… It was probably the trend!!! From #4 on we got interviews done by friends, we were open for anything that made noise… We did a compilation-tape (60 min) entitled Ca Vous Fait Rire! [“it makes you laugh!”] with – if I remember well – ‘Scraps’, ‘Butcher’, ‘Razzle Dazzle’, ‘M.S.T.’, ‘Outrage/Rebellion’, ‘Alptraum Gmbh’, ‘So Much Hate’, ‘Brains Of Humans’, ‘Heimat-Los’, … The cover was drawn by Ben [Marguerie] who had a style that resembled that of Pushead. His drawings appeared in a number of French fanzines at the time (Kontagion, but especially Alienation) and he made the cover for the French pressing of Stolen Life by ‘Rattus’… We also distributed some records and fanzines (that we got in consignment or traded).

The fanzine ended in 1989 for professional reasons. Laurent Laloue continued editing an issue of Col Canto and several issues of L’Oreille Cassée [“the broken ear”] during the 90s and 2000. Myself, I did a leaflet with reviews/interviews – I Want You To Be Punk! in the 90s…

What my involvement in the zine-scene learned/brought me? Loyal friends and mistrust towards official media…

‘Kafka Prosess’ (Oslo, Norway) was the band my old mate Gunnar Nuven (vocals) was in before he ventured in our direction with ‘So Much Hate’. The others in the band were guitarists Stian Løken (later drums for ‘Within Range’) & Nils Petter Aune (also ‘Svart Framtid’, bassist Fridtjof Benneche (also ‘Svart Framtid’) and drummer Thomas Fosseide (also ‘Bannlyst’ & ‘Stengte Dører’). Seems like they got interviewed here late ’86, around the time of the split-album with ‘Disorder…

KAFKA PROSESS IS A BAND FROM OSLO, NORWAY. THEY DID A SPLIT-LP WITH ‘DISORDER’, SING IN NORWEGIAN BUT LUCKILY FOR US THE LYRICS ARE TRANSLATED INTO ENGLISH.

ALWAYS THE SAME QUESTION: HOW DID YOU GET TOGETHER, HISTORY AND INFLUENCES?

‘Kafka Prosess’ started in the beginning of 1985: Nils (guitar), Fridtjof (bass), Gunnar (vocals) had been in ‘Svart Framtid’ which had split up at that moment. Thomas (drums) played in ‘Bannlyst’ and Stian (guitar) played in a band called ‘Blindt Hat’. I think that everything that happens around us influences our lyrics and music one way or another, everything that is energetic.

HAVE YOU DONE A LOT OF CONCERTS? IS IT EASY TO FIND LOCATIONS WHERE YOU CAN PLAY? HOW DOES THE AUDIENCE REACT?

We’ve played 15 concerts; 3 in England, 3 in Holland and 2 in Denmark. It’s hard to do concerts here in Norway, there are only two cities where there’s a punk scene: Trondheim and Oslo. Most of the public’s reactions were great.

KAFKA WAS A CZECHOSLOVAKIAN AUTHOR FROM THE BEGINNING OF THE CENTURY, WHAT’S THE RELATIONSHIP BETWEEN THE BAND AND THE WRITER; WHY THAT NAME?

It took a very long time to find a name, there were many alternatives, but we thought that ‘Kafka Prosess’ was the best. [In the novel Der Process] A crime has been committed and the police have a suspect, if they judge him for this crime without really having any evidence, it’s a Kafkian method. The name is about that. [The main character Josef K. becomes entangled in an incomprehensible legal system.]

HOW DID YOU GET TO DO AN LP WITH DISORDER?

It’s been years that we know the people of ‘Disorder’, two of them live here now. They wanted to do a record, but they only had songs for one side, so they asked us if we wanted to split-LP [One Day Son All This Will Be Yourz; 1986] with them. Half of the concerts we did were with ‘Disorder’.

WHAT ARE YOUR VIEWS ON POLITICS AND RELIGION?

Politicians and religious clergy want to control people; brainwashing, that’s what we call it. It’s fascism when some people try to force others to think and believe according to their views. We are against any kind of nazism/ fascism/ racism/ sexism. Left or right, it means the same thing in the end. Vote for them and they control you. People need more rights to decide for themselves how they want to live their lives. Do not be just a gray part of this machine.

At the moment it’s very cold.

WHAT DO YOU DO BESIDES THE BAND?

Play in other bands; right now we’re all working. Gunnar does X-Port records [together with Ote Kippersund], a small record-label and distribution. We’re all involved with the concerts we organise at the Blitz, the youth-centre [squatted autonomous venue] here.

WHAT KINDS OF PROBLEMS DO YOU ENCOUNTER WITH THE BAND?

Ultimtaely there are ups and downs. We had problems to decide which direction, musically, we should take. We have completely different musical tastes. Until now we managed to use everyone’s ideas, mix them together and everyone was happy with the result. Two of us want to do some speed-metal songs, two others hate that. So far it’s been an accustomed reason for quarrels within ‘Kafka Prosess’.

YOUR VIEWS ON ALCOHOL AND DRUGS?

Well, we are not straight-edge, we all drink alcohol as long as we have a good time together. Some of us smoke drugs and as long as people are not apathetic because of smoking, or violent and unconcerned because of the booze, we don’t care.

WHAT ARE THE GOALS OF ‘KAFKA PROSESS’ AS A BAND?

Get our music known to as many people as possible, without exhausting ourselves. Do more concerts, meet new people, new scenes. Communication in the world is important, let’s break barriers rather than creating them.

ARE THERE MANY BANDS, FANZINES AND CONCERTS IN NORWAY?

Good bands are ‘Angor Wat’ and ‘T.M.B.’ [The Midnight Blues] from Trondheim; going up north, to a place called Harstad, there’s ‘Barn Av Regnbuen’, in Oslo there’s ‘Stengte Dører’, ‘Spasm’, ‘So Much Hate’ and us. There’s a lot of bands formed all the time but they split up or change members too often to get somewhere. As far as fanzines are concerned: there are quite a few, but last year there were none. But there’s a lot of hope that it will change. There are a lot of new people coming to the scene now and there are projects in that direction. In Oslo we have two concerts a month with local and foreign bands.

WHAT DO YOU KNOW ABOUT FRANCE?

The student-riots, the sinking of the Greenpeace ship, the nationalist party that had something like 10% of the vote, a massive skinhead movement. Good bands like ‘Heimat-Los’, ‘Scraps’, ‘Final Blast’.

YOUR VIEWS ON THE INTERNATIONAL SCENE?

It’s great that punk/HC isn’t just English or American. There are punks, bands, labels and fanzines that are active all over the world and communicate with each other. Quite often we hear that this movement is dying but I see it rather grow all the time.

WHAT ARE YOU AFRAID OF?

A lot of things: I’m really worried about all these neo-nazi groups becoming popular and growing in Europe. It’s strange that people don’t learn anything from history. They take the worst events of the past and repeat them. In what strange world we live.

In April we are going to tour Germany and Holland [There’s some recordings of their show in Steenwijk 87-04-11.], right now we are working on an EP that will be released on X-Port records in the spring and maybe a split-12” on C.O.R. records (UK) later this year. [As far as I know that didn’t happen…] We’re also a bit tired of our old songs, so we’re working hard on new ones.

Never give up. It’s never too late.