No need to introduce ‘Doom’, I’m sure. This interview (with ‘Stick’) was done somewhere in 1996, between the release of their Monarchy Zoo 7” and the recording of the Rush Hour Of The Gods LP. They did a tour through Europe around that time too. In the band then were: Anthony ‘Stick’ Dickens (drums), Brian Talbot (guitar), Denis ‘The Deuce’ Boardman (guitar), Chris ‘Gazza’ Gascoigne (bass) & Wayne Southworth (vocals; R.I.P.).

Luc Ardilouze visited the Vort’n Vis in Ypres (Belgium) from time to time and we corresponded for a while. He lived in Bayonne (Pays Basque) and nowadays resides in Bordeaux (where he plays drums for ‘Gasmask Terrör’ an runs a small webstore Ratbone recs). This issue of C.O.S. (interviews with ‘Öpstand’ & Sludge recs, reviews and an article on police-violence) is a split with Ludovic Hache’s zine Ras B’bol. Before this Luc did another zine entitled Scream (7 issues I believe)… He also blogs from time to time (Kängnäve)… 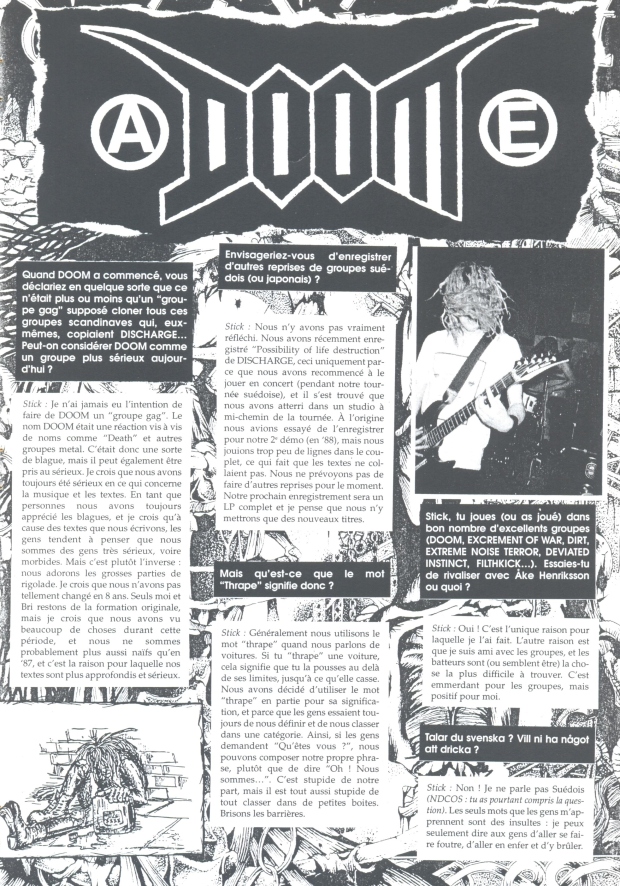 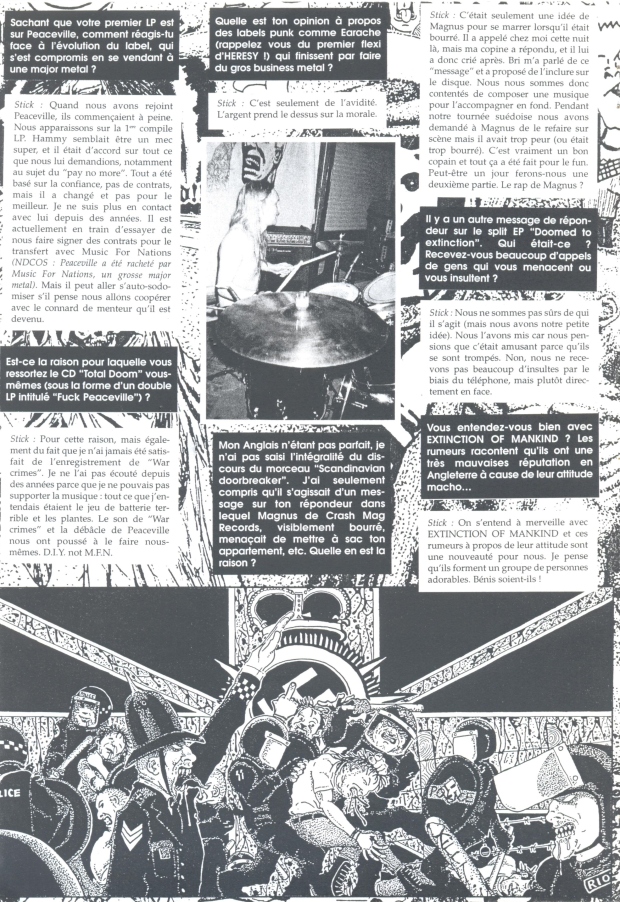 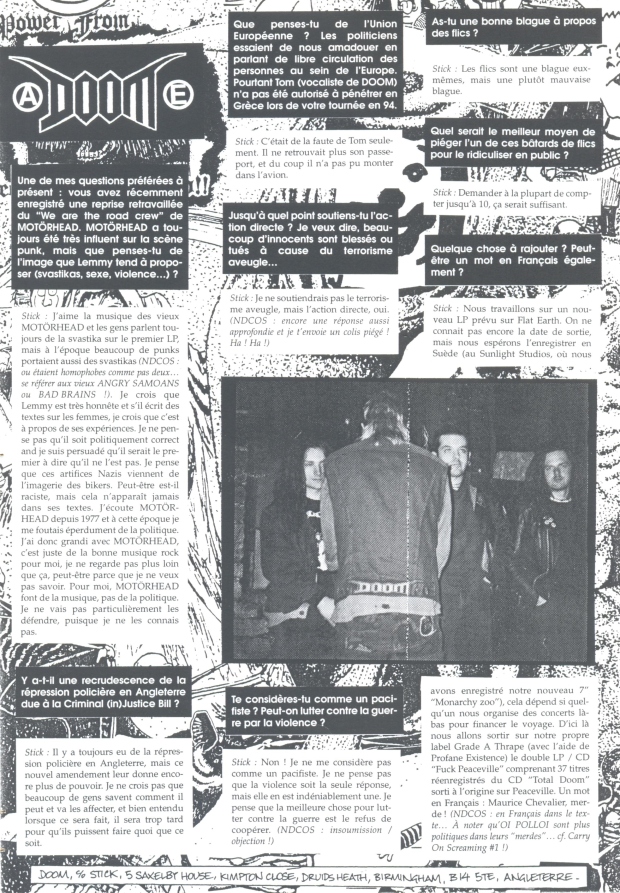 When ‘Doom’ started out, you declared somehow that it wasn’t much more or less than a ‘joke band’ supposed to be a clone all these Scandinavian bands, who were copying ‘Discharge’ themselves… Can we consider ‘Doom’ as a more serious band nowadays?

Stick: I never intended to make ‘Doom’ a ‘joke’ band. The name ‘Doom’ was a reaction against names like ‘Death’ and other metal bands. So it was a kind of joke but it can also be taken seriously. I believe we have always been serious regarding the music and the lyrics. As individuals we’ve always appreciated jokes and I believe that because of the lyrics we write, people tend to think that we’re very serious, if not morbid. But it is rather the opposite: we love the big parties of fun. I think we didn’t change that much in 8 years. Only me and Bri remain from the original line-up but I believe we’ve seen through a lot during this period, and we’re probably not that naive as in ‘87, and that’s why our lyrics are deeper and more serious.

Would you consider recording other covers of Swedish or Japanese bands?

Stick: We haven’t really thought about it. We recently recorded Possibility Of Life Destruction by ‘Discharge’, only because we started to play it live (during our Swedish tour) and it turned out that we ended up in a studio halfway the tour. Originally we tried to record it for our second demo (in ‘88) but we played too few lines in the verse, so that the lyrics didn’t fit. We don’t expect to do other covers at the moment. Our next recording will be a full LP and I think it will contain nothing but new songs.

So what does the word ‘thrape’ mean then?

Stick: Generally we use the word ‘thrape’ when we talk about cars. If you ‘thrape’ a car, it means you push it beyond its limits until it breaks. We decided to use the word ‘thrape’ partly for its significance and because people are always trying to define us and classify us in a category. So when people ask “What are you?”, we can use our own words, rather than saying “Oh! We are…”. It’s a foolish thing on our side but it’s equally stupid to classify everything in small boxes. Break the barriers.

Stick, you play (or have played) in many excellent bands (‘Doom’, ‘Excrement Of War’, ‘Dirt’, ‘Extreme Noise Terror’, ‘Deviated Instinct’, ‘Filthkick’,…). Are you trying to compete with Ake Henriksson [played for ‘Mob 47’, ‘Protes Bengt’, etc. etc.] or what?

Stick: Yes! That’s the only reason for doing it. The other reason is that I’m friends with the bands and drummers are (or appear to be) the most difficult thing to find. That’s annoying for bands but positive for me.

Talar du svenska? Vill ni ha nagot att dricka? [Do you speak Swedish? Would you like something to drink?]

Stick: No! I don’t speak Swedish. (Red.: But you understood the question.) The only words that people teach me are insults: I can only tell people to fuck off, go to hell and burn there.

Knowing that your first LP [War Crimes, 1988] got out on Peaceville, how do you react regarding the evolution of the label, that ended up selling out to a metal major label?

Stick: When we joined Peaceville they had just started out. We appear on the first compilation-LP. ‘Hammy’ [Paul Halmshaw] seemed like a great guy and he agreed to everything we asked, particularly regarding the ‘pay no more’ label. Everything was based on trust, no contracts, but he changed and not for the better. I’m no longer in contact with him since years. Nowadays he’s trying to make us sign contracts for the transfer to Music For Nations (Red.: Peaceville was bought by Music For Nations, a big metal major label.) But he can go fuck himself if he thinks we will cooperate with the liar asshole he is.

Is this the reason why you’re-releasing the CD Total Doom [1989] yourselves (as a double-LP entitled Fuck Peaceville [1995])?

Stick: For this reason but also because I’ve never been satisfied with the recording of War Crimes. I haven’t listened to it for years because I couldn’t stand the music: all I could hear was the terrible drumming. The sound of War Crimes and the fiasco with Peaceville pushed us to do it ourselves. D.I.Y. not M.F.N.

What’s your opinion about punk-labels such as Earache (remember the first ‘Heresy’ flexi!) that end up getting into big business?

My English is not perfect, I didn’t get the full meaning of the song Scandinavian Doorbreaker. I only understood it was a message on your answering-machine by Magnus [Jansson] of Crash Mag records, apparently drunk, threatening to wreck your flat, etc. What was the reason for that?

Stick: It was just an idea of Magnus to make fun when he was drunk. He called my home that night but my girlfriend answered and so he yelled at her. Bri told me about this ‘message’ and proposed to include it on the record. We were therefore happy to compose music to accompany it in the background. During our Swedish tour we asked Magnus to do it again on stage but he was too afraid (or too drunk). It really is a good friend and all that was done for fun. Perhaps one day we will do a second part. The Magnus rap?

There is another answering-machine message on the split-EP Doomed To Extinction [1994]. Who was that? Do you get many calls from people threatening you or insulting you?

Stick: We’re not sure who they are (but we have a faint idea). We used it because we thought it was fun because they were wrong. No, we don’t get a lot of insults via the phone but directly into our face.

Do you get along well with ‘Extinction Of Mankind’? Rumors go that they have a very bad reputation in England because of their macho attitude …

Stick: We get along perfectly with ‘Extinction Of Mankind’ and these rumors regarding their attitudes are new to us. I think they are a band of lovely people. Bless them!

One of my favourite questions at the moment: you’ve recently recorded a cover of We Are The Road Crew by ‘Motörhead’. ‘Motörhead’ has always been very influential for the punk-scene but what do you think of the image that Lemmy tends to portray (swastikas, sex, violence,…)?

Stick: I love old ‘Motörhead’ music and people always talk about the swastika on the first LP but at the time a lot of punks also wore swastikas (Red.: Or were homophobic… cf. old ‘Angry Samoans’ or ‘Bad Brains’!). I believe Lemmy’s very honest and when he writes about women, I think it’s about his experiences. [Brob: That’s blaming and shaming the women! Sexist!] I don’t think he’s politically correct [Brob: Lemmy was a conservative narrowminded bastard in my opinion.] and I’m convinced he would be the first to say that he’s not. I think these nazi paraphernalia are bikers’ images. Perhaps he’s racist but that never appeared in his lyrics. I listen to ‘Motörhead’ since 1977 and at that time I didn’t really care about politics. So I grew up with ‘Motörhead’, it’s just good rock-music to me, I don’t look any further than that, maybe because I don’t want to know. [Brob: ???!!!] To me, ‘Motörhead’ do music, not politics. I won’t particularly defend them since I don’t know them.

Is there a resurgence of police-repression in England due to the Criminal (in)Justice Bill?

Stick: There has always been police-repression in England but this new amendment gives them even more power. I don’t believe many people know how it can and will affect them, and of course when it’s done, it will be too late for them to do anything about it.

What do you think of European Union? Politicians are trying to coax us by talking about free movement of people within Europe. Yet Tom [Croft] (vocalist of ‘Doom’) was not allowed to enter Greece during your tour in ’94.

Stick: It was Tom’s fault only. He couldn’t find his passport so he could not get on the plane.

To what extent do you support direct action? I mean, a lot of innocent people are injured or killed due to indiscriminate terrorism…

Stick: I wouldn’t support the indiscriminate terrorism but direct action, yes. (Red.: Another one of these thorough answers and I’m sending you a parcel-bomb! Haha!)

Do you consider yourself a pacifist? Can we fight war through violence?

Stick: No! I don’t consider myself a pacifist. I don’t think that violence is the only answer but it undeniably is one. I think the best thing to fight against war is the refusal to cooperate. (Red.: Disobedience / objection!)

Can you tell us a joke about cops?

Stick: The cops are a joke by themselves but a rather sick joke.

What would be the best way to trap one of these bastard cops to ridicule him in public?

Stick: Ask many of them to count upto 10, that would be enough.

Something to add? Perhaps a word in French as well?

Stick: We are working on a new LP [Rush Hour Of The Gods, 1996] scheduled on Flat Earth. We still don’t know the release-date but hopefully we’ll record it in Sweden (at Sunlight Studios, where we recorded our new 7” Monarchy Zoo [1996]), it depends if someone organises us concerts there to fund the trip. By then we’ll release the double LP/CD Fuck Peaceville on our own label Thrape Grade A (with the help of Profane Existence) including 37 re-recorded tracks from the CD Total Doom originally released on Peaceville. A word in French: Maurice Chevalier, shit! (Red.: Note that ‘Oi Polloi’ are more political regarding their ‘shit’… see Carry On Screaming # 1!)

This entry was posted in 1996, French zines and tagged Carry On Screaming, Doom, HardCore, Punk. Bookmark the permalink.